Austin Appleby's superb MurmurHash3 is one of the best general purpose hash functions available today. Still, as good as it is, there are a couple of minor things about it that make me uneasy. I want to talk about one of those things today.

Here is the 64-bit finalizer from MurmurHash3:

The goal of a finalizer (sometimes called a "bit mixer") is to take an intermediate hash value that may not be thoroughly mixed and increase its entropy to obtain both better distribution and fewer collisions among hashes. Small differences in input values, as you might get when hashing nearly identical data, should result in large differences in output values after mixing.

Ideally, flipping a single bit in the input key results in all output bits changing with a probability of 0.5. This is called the Avalanche effect. Cryptographically-secure hashes are willing to spend an impressive number of computer cycles getting this probability close to 0.5. Hash functions that don't have to be cryptographically-secure trade away some avalanche accuracy in favor of performance. MurmurHash3 gets close to 0.5 with a remarkable economy of effort: Just two multiplies, three shifts and three exclusive-ors. Austin reports MurmurHash3 avalanches all bits to within 0.25% bias.

The overall structure of the finalizer (shifts and multiplies) was designed by Austin. The constants were chosen by "a simple simulated-annealing algorithm" (his description.) The part that troubles me is the simulation was driven with random numbers. That doesn't seem right. After all, if the inputs were truly random what would be the point of mixing? It seems to me that a good mixer should be able to take a series of, say, counting numbers and produce output that is virtually indistinguishable from random.

First question: Could I build a better mixer by training the simulation on low-entropy inputs such as counting numbers and high-likelihood bit patterns? Here are the results for MurmurHash3 and the top 14 mixers my simulation found:

The maximum error tends to be about seven times lower. Mean error is lower too but only slightly. The answer, then, is yes, it does get better results with low-entropy keys. But that leads to the second question: Does training on low-entropy keys result in better or worse performance with high-entropy keys? To find out, I tested it with 100 million cryptographic-quality random numbers:

Yes, we can do slightly better than MurmurHash3 even on random test keys.

On average this is a small but measurable improvement that comes at no performance cost. For the worst-case, low-entropy keys that concern us the most, it provides a significant improvement.

Here's a handy tip: A great use for a mixer like this is to use it to "purify" untrustworthy input hash keys. If a calling function provides poor-quality hashes (even counting numbers!) as input to your code then purifying it with one of these mixers will insure it does no harm.

Here are the parameters for the mixers I tested:

Posted by David Stafford at 9:29 PM 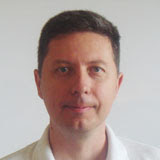